PAVEMENT-VENDOR: We Too Deserve A Place In The Sun | January 1957 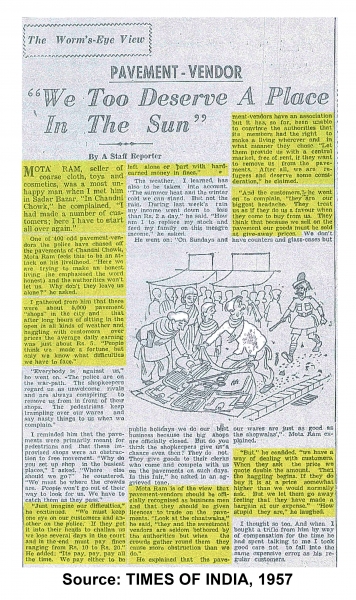 Mota Ram, seller of coarse cloth, toys and cosmetics, was a most unhappy man when I met him Sadar Bazar. "In Chandni Chowk," he complained, "I had made a number of customers: here I have to start all over again."

One of 400 odd pavement-vendors the police have chased off the pavement of Chandni Chowk, Mota Ram feels this to be an attack on his livelihood. "Here we are trying to make an honest living (he emphasised the word honest) and the authorities won't let us. Why don't they leave us alone?" he asked.

I gathered from him that there were about 5,000 pavement "shops" in the city and that after long hours of sitting in the open in all kinds of weather and haggling with customers over prices the average daily earning was just about Rs.5. "People think we made a fortune, but only we know what difficulties we have to face."

"Just imagine our difficulties," he continued. "We must keep one eye on our customers and another on the police. If they get it into their heads to challan us we lose several days in the court and in the end must pay fines ranging from Rs.10 to Rs. 20." He added: "It's pay, pay, pay all the time. We pay either to be left alone or part with hard-earned money in fines."

He explained that the pavement-vendors have an association but it has, so far, been unable to convince the authorities that its members had the right to make a living wherever and in what manner they chose. "Let them provide us with a central market, free of rent, if they want to remove us from the pavements. After all, we are refugees and deserve some consideration," he claimed.

"And the customers," he went on to complain, "they are our biggest headache. They treat us as if they do us a favour when they come to buy from us. They think that because we sell on the pavement our goods must be sold at give-away prices."

"But," he confided. "We have a way of dealing with customers. When they ask the price we quote double the amount. Then the haggling begins. If they do buy it is at a price somewhat higher that we would normally ask. But we let them go away feeling that they have made a bargain at our expense." "How stupid they are," he laughed.