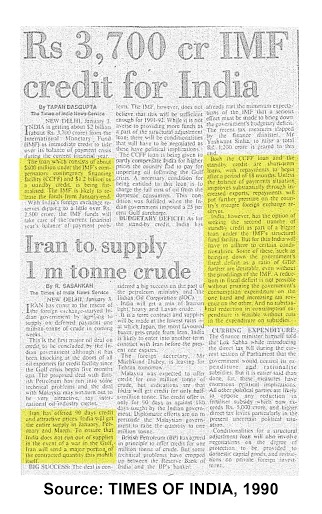 The loan which consists of about $800 million under the IMF's compensatory contingency financing facility(CCFF) and $ 1.2 billion as a standby credit,is being farmalised. The IMF is likely to release the funds from January end.
Iran has offered 90 days credit and attractive prices.India will get the entire supply in January,February and March. To ensure that India does not run out of supplies in the event of a war in the Gulf Iran will send a major portion of the contracted quantity this month itself.
both the CCFF loan and the standby credit are short-term loans,with repayments to begin after a period of 18 months.Unless the balance of payments situation improves substantially through increased exports,repayments will put further pressure on the country's meagre foreign exchange services.
India,however,has the option of seeking the second tranche of standby credit as part of a bigger loan under the IMF's structural fund facility.But for this,India will have to adhere to certain conditionalities. Some of these,such as bringing down the government's fiscal deficit as a ratio of GDP are further desirable,even without the prodding of the IMF.A reduction in physical deficit is not possible without pruning the government's consumption expenditure on the one hand and increasing tax revenue on the other.And no substantial reduction in consumption expenditure is feasible without cuts in the expenditure on subsidies.