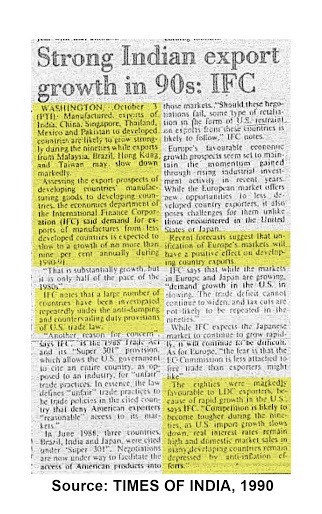 Manufactured experts of India, China, Singapore, Thailand, Mexico and Pakistan to be developed countries are likely to grow strongly during the nineties while exports from Malaysia , Brazil, Hong Kong and Taiwan may slow down markedly.
Assessing the export prospects of developing countries’ manufacturing goods to developing countries,the economics department of the International Finance Corporation(IFC) said demands for exports of manufacturers from less developed countries is expected to slow to a growth of no more than nine percent annually during 1990-91.
IFC notes that a large number of countries have been investigated repeatedly under the anti-dumping and countervailing duty provisions of U.S. trade law.
Recent forecasts suggest that unification of Europe’s markets will have a positive effect on developing country exports.
The eighties were markedly favourable to LDC exporters,because of rapid growth in the U.S.,says IFC.”Competition is likely to become tougher during the nineties,as U.S. import growth slows down,real interest rates remain high and domestic market sales in many developing countries remain depressed by anti-inflation effects.”