Mr Vikram Bajaj has previously served as the Managing Director of Uncle Chipps since 1986 till 2000, and presently serves as Managing Director of Inlingua, New Delhi.Here, he talks about how due to liberalisation the domestic wafers industry was prone to various difficulties. He states that 90% of those units had to recede to foreign competition such as Pepsico’s Lays.

There was another state of liberalisation, and that’s when, again it wasn’t edible oils which was liberalised. It was still restricted and licenced but various types of snack projects or snack food projects. There was something called a project in port licencing which was allowed so you could actually deport a bunch of machinery for a particular product. And there was some liberalisation for a small capacity and we decided that okay, refined oils are used in a thing like let’s say potato wafers. And we chose to go down that and I became person for action, established chips factory and that was the Uncle Chips brand which became quite popular in the next ten odd years. And this was right at the cusp of the change, this was just three years before ‘91, in ‘88 we started and not quite realising that perhaps the licence era is about to end and very big changes are upcoming. No, in this particular case actually they did not actually issue licences, well there was some kind of a registration with DGTD which I think stood for Directorate General of Trade and Development. So you could register your unit and there was a liberalised foreign exchange regime where you could order your project import. So you were allowed to import those machines and there was complete, I mean there was a complete(what should I say) race that was almost like a rat race to try and get these machines in. And there were something like a 100 odd projects, just in particular chips which all kind of came to fruition in those couple of years because everybody was so desperate to do economic activity and this was one possible way of doing it, not just that I am saying, not just potato chips, perhaps it could be true for excluded snacks and for a variety of other things which were liberalised at that point under that project report scheme but specifically for let’s say potato chips, there was a rush, there was a complete stampede of big and small industrial houses, people from chartered accountants to the largest names in industry vying to get a potato chips unit down. And of course it was a blood bath within a year of our launch of Uncle Chips, there were at least fifty to seventy branded products which came on the market, in various parts of the country. The other industries of the past, clearly it was going to be much more competitive which it was. It was a real blood bath in next two three years, practically 90% of those brands died and only a handful survived and they were also finally beated out and there was just maybe a couple left. One of them was of course PepsiCo’s Lays and of course in the liberalised era, their skills and their expertise and their access to capital meant that they would soon be much more powerful, which they became and finally Uncle Chips company I started was sold to PepsiCo at a certain juncture at Rs.50,000 because of those competitive issues. Well I seriously think that the entrepreneurship at that time was restricted, it was full of impediments and it came easier to those who were already in business because then you already had team of people to sort of knock on the right doors, you know, go through the grind and get the permission and so on. So it was almost as I said earlier, an exclusive club and mostly a new industry or new entrepreneurial efforts came out of that club or maybe like you know you had a new generation of a particular business family, then they would do something. But very rarely would you see somebody who wasn’t from an industrial or entrepreneurial family coming up and making something with it. All of that started really happening post the liberalisation era. All in areas which were not regulated IT being one of them. So it was there where there wasn’t anything in the past and there wasn’t any regulation because no people knew that such a product or service existed that there was entrepreneurship. Other than that, what you see today, the complete, you know, change in fortunes of the old card and the complete new, the Bansals and so on sort of merged today that is a phenomenon  which is completely a function of what happened in 91 and thereafter. And it was a complete desert in Indian transformation. Entrepreneurship might have consisted in opening a shop perhaps in your neighbourhood and hoping you could get the agency of some large FMCG company. That was what it was restricted to for the average job. 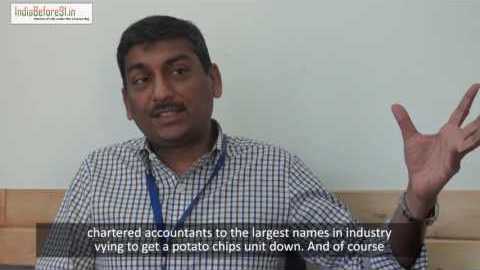