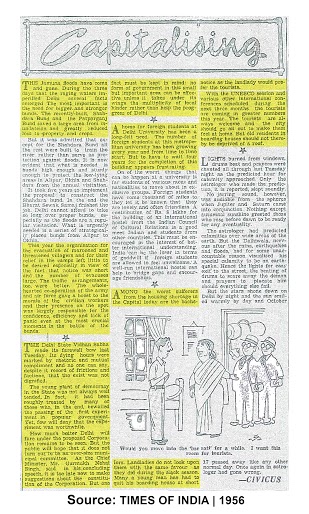 The Jamuna floods have come and gone.During the three days that the raging waters imperilled Delhi several facts emerged.The most important is the need for bigger and stronger bunds.The recently built,Shahdara-bund and the Patparganj bund saved a large area from in-undateion and greatly reduced loss to property and crops.
This year the organization for the evacuation of marooned and threatened villagers and for their relief in the camps left little to be desired especially in view of the fact that notice was short and the number of evacuees large.The traffic arrangements too,were better.The whole-hearted co-operation of the army and air-force gave a boost to the morale of the civilian workers and their presence on the spot was largely responsible for the confidence,efficiency and lack of panic even at the most crucial moments in the battle of the bunds.

The Delhi State Vidhan Sabha made its farewell bow last tuesday.Its dying hours were marked by rhetoric and mutual compliment and no one can say,despite its record of frictions and factions that the exist was not dignified.
The young plant of democracy in the state was not always well-tended.In fact,it had been roughly treated by many of those,who in the end,bewailed the passing of the first experiment in popular government.Yet,few will deny that the experiment was worthwhile.
How much better Delhi will fare under the proposed corporation remains to be seen.But the public will hope that it does not turn out to be an over-size municipal committee.As the Chief Minister,Mr. Gurmukh Nehal Singh,said in his concluding speech,it is too late now to make suggestions about the constitution of the corporation.But one fact must be kept in mind:no form of government in this small but important area can be effective unless it takes under its wings the multiplicity of local hinder rather than help the progress of Delhi.

Among the worst sufferers from the housing shortage in Capital today are the bachelors.Landlords do not look upon them with the same favour as they did during the slack season.Many a young man has had to quit his boarding house at short notice as the landlady would prefer for tourists.
With the UNESCO session and various other international conferences scheduled during the next three months the tourists are coming in greater number this year.The tourists are always welcome and the city should go all out to make them feel at home.But old residents in boarding houses should not thereby be deprived of a roof.