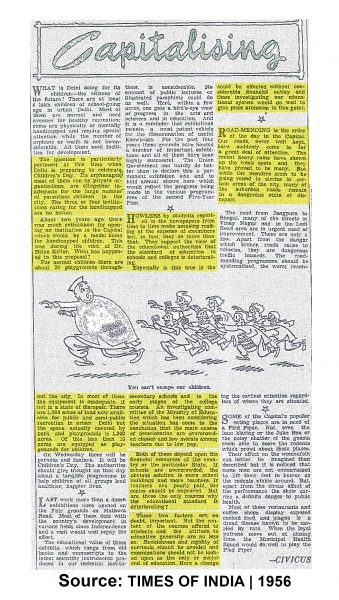 The question is particularly pertinent at this time when Delhi is preparing to celebrate children's day. It's orphanages, most of them run by private organisations, re all together inadequate for the large number of parent less children in the city. The three or four institutions caring for the handicap are no better.

About two years ago there was much enthusiasm for opening an institution in the cap which would be a model home for the handicap children. This was during the visit of Dr. Helen Keller. What has happened to this proposal?

For normal children there are about 20 playgrounds throughout the city. In most of them the equipment is inadequate, if not in a state of disrepair. There are 1500 acres of land now available for public and semi-public recreation in urban Delhi but the space actually covered by park and playgrounds is 1300 acres. Of this less than 10 acres are equipped as playgrounds for children.

Howlers by students reported in the newspapers from time to time make amusing reading at the expense of examinees but in fact they do more than that. They support the view of the educational authorities that the standard of education in the schools and colleges is deteriorating.

Especially is this true in the secondary schools and in the early stages of the college courses. An investigating committee of the Minister of Education which has been considering the situation has come to the conclusion that the main causes of deterioration are overcrowded classes and low morale among teachers due to low pay.

Both of these depend upon the financial resources of the country or the particular state. If schools are overcrowded, the obvious solution is more school buildings and more teachers. If teachers are poorly paid, the scales should be improved. But are these the only reasons why the educational standard is deteriorating?

These two factors are, no doubt, important. With the content of the courses offered to students and the attitude to education generally are no less so. Bookishness and rigidity of curricula should be avoided and examinations should not be looked upon us as the only or major end of education. Here change could be effected without considerable financial outlay and though investigating our educational system would do well to give prior attention to this point.

Road-mending is the order of the day in the capital. Our roads, never well kept, have suddenly come in for great deal of attention. The recent heavy rains have shown up the weak spots and they have proved to be many. But while the Menderes seem to be going round in circles in certain areas of the city, many of the sub-urban roads remain in a dangerous state of disrepair.