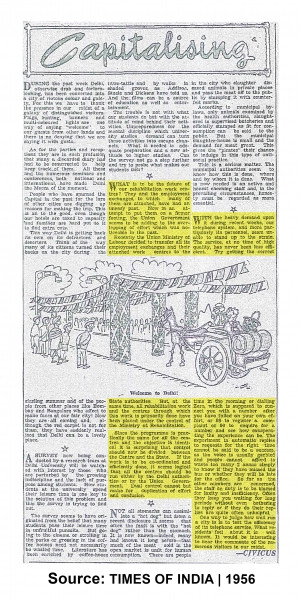 Recently the Union Ministry of Labour decided to transfer all its employment exchanges and their attached work centres to the State authorities. But, at the same time, all the rehabilitation work and the centres through which this work is primarily done have been placed under the control of the Ministry of Rehabilitation.

Since the programme is practically the same for all the centres and the objective is identical it is surprising that control should now be divided between the Centre and the State. If the work is to be co-ordinated and efficiently done, it seems logical that all the centre should be run either by the Delhi authorities or the Union Government. Dual control cannot but make for duplication of effort and confusion.

With the heavy demand on it during the recent weeks, our telephone system, and more particularly its personnel, seem unable to stand up to the strain. The service, at no time of high quality, has never been less efficient. Try getting the correct time in the morning or dealing Zero, which is supposed to connect you with the a number after you have failed on your own effort, or 98 to register a complaint or 99 to enquire for a number and see how exasperating the experience can be. The experiment can be. The experiment in automatic replies to requests for the right time cannot be said to be a success, as the voice is usually garb;ed and people cannot afford to waste too many 2 annas simply to know if they have missed the bus or whether they will be late for the office. So far as the other numbers are concerned, the staff on duty is to be blamed for laxity and inefficiency. Often they keep you waiting for long periods without even bothering to reply or if they do their replies are quite often unhelpful.

One way to judge how well run a city is to test the efficiency of its telephone service What residents feel about it is well known. It would be interesting to hear the comments of the numerous visitors in our midst.