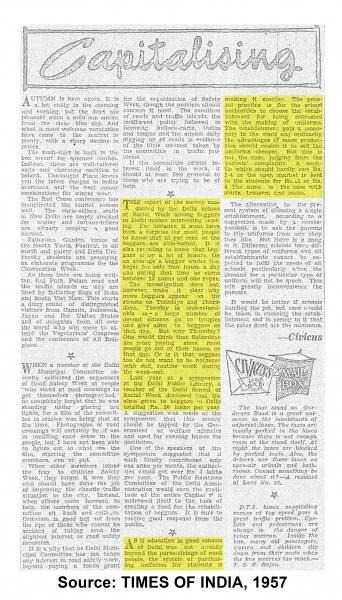 The report of the survey conducted by the Delhi School of Social Work among beggars in Delhi makes interesting reading. For instance, it must have been a surprise for most to know that 45 per cent of the beggars are able-bodied. It is also revealing to know that beggars enjoy a lot of leisure. On an average a beggar works (i.e begs) for only four hours a day and during that time he earns between 12 annas and one rupee.
The investigation does not, however, make it clear why more beggars appear on the streets on Tuesdays and Thursdays. Tuesday is understandable as a large number of devout citizens go to temples and give alms to beggars on that day. But why Thursday? One would think that Saturdays are more paying since people go out of their homes on that day. Or is it that beggars too do not want to be bothered with dull, routine work during the week-end.

Last year at a symposium at the Delhi Public Library, a teacher of the Delhi School of Social Work disclosed that the alms given to beggars in Delhi totalled Rs. 10 Lakhs per year.

As if education in good schools of Delhi was not already beyond the purse-strings of most people, the system of purchasing uniforms for students is making it costlier. The general practice is for the school authorities to choose the establishment for being entrusted with the making of uniforms. The establishment gets a monopoly in the work and ordinarily the advantages of mass production should enable it to sell the uniforms cheaper. But this is not the case, judging from the parents’ complaints. A neck-tie which should hardly cost Rs.1-2 in the open market is sold to the students for Rs.3 or Rs.4. The same is the case with shirts, trousers and socks.