DELICENSING IS ONLY THE FIRST STEP|AUGUST 1991 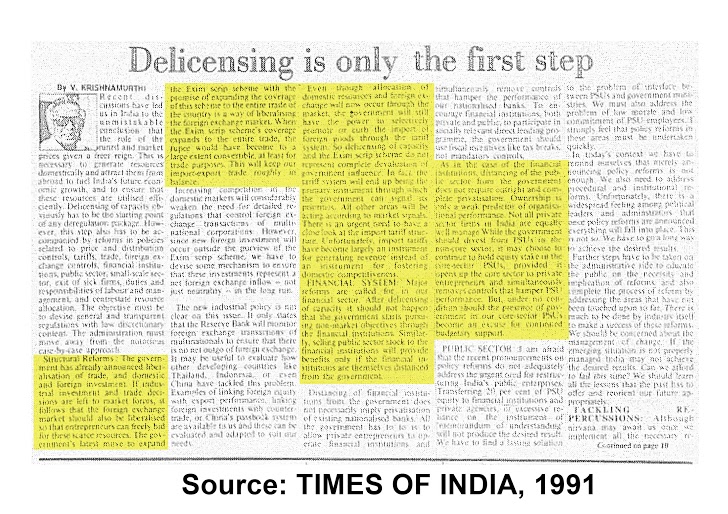 Structural Reforms: The government has already announced liberalization of trade,and domestic and foreign investment.If industrial investment and trade decisions are left to market forces,it follows that the foreign exchange market should also be liberalized so that entrepreneurs can freely bid for these scarce resources.The government’s latest move to expand the Exim Scrip scheme with the promise of expanding the coverage of this scheme to the entire trade of the country is a way of liberalizing the foreign exchange market.When the Exim Scrip Scheme’s coverage expand to the entire trade,the rupee would have become to a large extent convertible,atleast for trade purposes.This would keep out import-export trade roughly in balance.
Even though allocation of domestic resources and foreign exchange will now occur through the market,the government will still have the power to selectively promote or curb the import of foreign goods through tariff system.So delicensing of the capacity and the Exim Scrip scheme do not represent complete devaluation of government influence.In fact,the tariff system will end up being the primary instrument through which the government can signal its priorities.All other areas will be acting according to market signals.There is an urgent need to have a look at the import tariff structure.Unfortunately,import tariffs have become largely an instrument of generating revenue instead of an instrument for fostering domestic competitiveness.
FINANCIAL SYSTEM:Major reforms are called for in our financial sector.After delicensing of capacity it should not happen that the government starts pursuing non-market objectives through the financial institutions.Similarly,selling public sector stock to the financial institutions provide benefits only if the financial institutions are themselves distanced from the government.
As in the case of the financial institutions, distancing of the public sector from the government does not require outright and complete privatization.Ownership is only a weak predictor of organizational performance.Not all private sector firms in India are equally well manage while the government should divest from PSUs in the non-core sector,it may choose to continue to hold equity stake in the core-sector PSUs,provided it opens up the core sector to private entrepreneurs,and simultaneously removes controls that hamper PSU performance.But, under no condition should the presence of government in our core-sector PSUs become an excuse for continued budgetary support.