Mr. Bibek Debroy, a member of NITI Aayog and Professor at Centre for Policy Research (New Delhi) tells listeners about the ‘lightening’ trunk calling facility that was available then and the dilemma of the recipient of not knowing when the call might come through. He touches upon serious subjects that have gone through a transition over the years as well as the change in attitude of the Indian society.

Well, I think the really interesting question that has not been answered ever satisfactorily and don’t even ask the question is there a hypothesis or a proposition that the bureaucracy is against reforms, the bureaucracy is lethargic, the bureaucracy is inertia-prone it resists change. How is it that this bureaucracy actually introduced the reforms? We perpetually debate about reforms not having happened, however the reforms are defined. What combinations of circumstances led to reforms being driven between 1991 and 1993? All reforms subsequent to 1993 were almost increment; I am just focusing on that particular period 1991-1993. Reforms are not done only by the Prime Minister; reforms are not done only by the Finance Minister. There was a peculiar constellation of forces, configuration of forces in the Finance Ministry at North Block, between 1991 and 1993 which led to all of this happening. Perhaps coincidence, perhaps relevantly chosen, this is something that I find relatively ignored. People mention Narsimha Rao; people mention Manmohan Singh that these are the people. Who’ve they wanted it have stubbed whatever these two gentlemen were trying to do.Reforms are not only about doing the reforms; reforms are also about selling the reforms, marketing the reforms, that particular point, coincidence, where the very good marketing/packaging team which would convincingly appear on television channels and sell the reforms. So that’s another related point that people often tend to forget. My growing up years were in the 60s. Most people now no longer remember was in the 60s, mid-60s we went through droughts, there was food scarcity, this was much before the green revolution even took hold of. So in those days, you had all kinds of restrictions on food. There were limitations on the number of guests you could invite; those were the days of the so-called black marketing etc. Even much later, when I moved to Delhi as a student it was not very easy to get milk. Milk was in short supplies. So, the countless number of things that were in short supplies. When I went abroad as a student, the normal allowance was 3 pounds or 3 dollars; I forget which one of the two, which was simply not sufficient. So, you had to go to the Reserve Bank of India in Parliament Street and get a special permission and I remember my father was delighted when he came back with permission for not 3 dollars but something like 35 dollars. So, in every particular area it was a shortage economy.

Recently, we had several landline connections at home. So, then I told my wife that why am I not surrendering to these landline connections, because that was an issue that was mine, it was not really hers. She said I don’t know, we never use them, so why don’t you surrender them and I could never bring myself to surrender them and then I realized what was happening at the level of the subconscious, that a telephone connection was so very rare you didn’t surrender. So I had to sort of force myself; let’s rid if these connections, we don’t want them.

Today, wherever you are, let’s say you’re in Chennai, now I can just pick up my phone and that’s it. We are talking about an era where it was just landlines, landlines which normally did not have STD connections. Normally, STD revolution is essentially post mid-80s. No STDs, you had this concept of trunk calls. Trunk calls means that you tell the telephone operator, the telephone operator connects you instantly. And there was a whole category, the most expensive one was something called ‘lightening’, lightening meant that you ring immediately and it’s quickly just connected. Otherwise you book a trunk call, and that trunk call could come through anytime in the next 12 hours. So if you booked a trunk call, you sit at home and wait for the trunk call to come, you can’t afford to miss it of course. So you booked the trunk call in the night. So the reverse calls essentially meant that I am calling you, but the charges are paid by the caller because the charges were considerable. 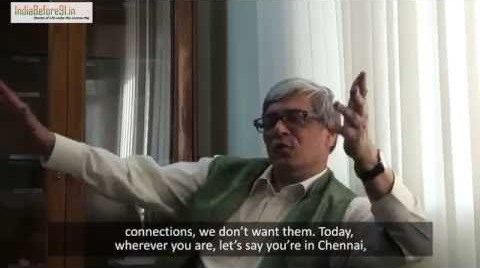