The Fate of a Second-hand Premier Padmini: Mohit Satyanand

Mohit Satyanand | Experiences Under the License Raj | India Before 1991

Mohit Satyanand, Chairman and Founder at Teamwork Arts, elaborates on how a second hand car was costlier than a brand new car in the pre-1991 times and how reforms have been trans-formative. He shares his experiences of watching programs like Chitrahar and Krishi Darshan which were screened on Doordarshan at that time, and how the number of TV channels have increased drastically post 1991.

Talking about industrial licensing, he says, "So commodities may or may not have been scarce but the permission to process commodities became scarce. So you were creating a new kind of scarcity."

Watch this interesting video to know more about how life was under License Raj. Transcript below:

The reforms were extremely far-reaching in nature. To my mind the most far-reaching was the abolition of the industrial licensing act because what the industrial licensing act had done was to seek to alter one of the fundamental laws of Economics which is that the successful must grow, the efficient must grow and the unsuccessful and inefficient must fall by your sight. Let's take a sector that I am familiar with which is flour milling. It is as basic a sector as you have and the technology required is really really minimal. You take wheat, you grind it in a mill and you get aata and maida and all the other stuff, so a really basic sector. There were capacity limits on it. So if I was running a flour mill that I could set up a new mill as capacity expanded. That license to set up a new flour mill became a scarce commodity. So commodities may or may not have been scarce but the permission to process commodities became scarce. So you were creating a new kind of scarcity.

Today they say when you drive a car out of the dealership, the moment it leaves the dealership its value drops by 25%. Nobody wants to buy a second-hand car and that is the way around the world. But in the 70s and 80s it was the other way round. The moment you drove a Premier Padmini out of the showroom, its value went up, not by 25% or 40% or 50% or maybe by 60 or 70 percent because of the shortage of a Premier Padmini. So my exact figures may be wrong but if I remember right, in the late 70s-early 80s a Premier Padmini cost a little over Rs. 30,000 in terms of dealer price. But there was a waiting list of 7 years unless you happened to be a government servant in which case depending upon your seniority and so on you got it within a year.  A year was really fast; you got a Premier Padmini within a year. And the value that Premier Padmini when it came out of the showroom was 50,000 rupees or if it was marriage season then it was Rs. 60,000. So you had a situation where government servants, senior government servants could drive their Premier Padmini for 3 years and sell it at a price which was higher than the price that they paid for it.

This is one of the biggest illustrations to my mind of how things have changed in terms of choice. Beyond technology, technology is one part but just if you look at television. 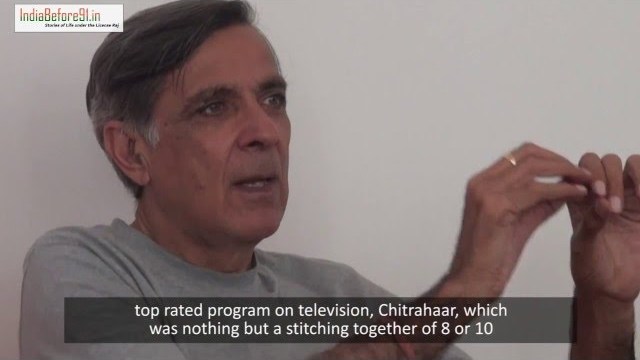