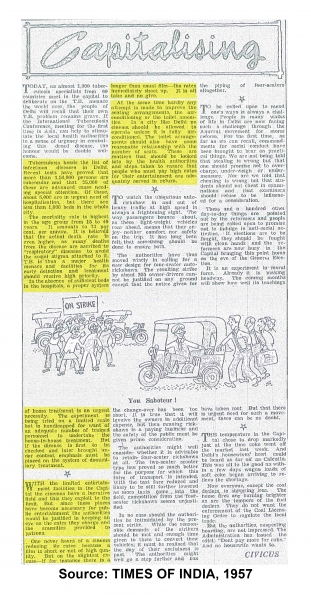 Tuberculosis heads the list of infectious diseases in Delhi. Recent tests have proved that more than 1,50,000 persons are tubercular and that 25,000 of these are advanced cases needing special attention. Of these, about 5,000 are in urgent need of hospitalisation, but there are less than 1,000 beds in the whole city.

The mortality rate is the highest in the age group of 15-40 years. It amounts to 73 per cent per annum. It is believed that the actual death rate is even higher, as many deaths from diseases are ascribed to "respiratory" diseases to avoid the social stigma attached to it. T.B. is thus a major health menace and facilities for it's early detection and treatment should receive high priority.

In the absence of sufficient beds in the hospitals, a proper system of home treatment is an urgent necessity. The experiment is being tried on a limited scale but is handicapped for want of an adequate number of trained personnel to undertake the house-to-house treatment. But if disease is first to be checked and later brought under control, emphasis must be placed on the system of domiciliary treatment.

With the limited entertainment facilities in the capital the cinemas have a lucrative field and this they exploit to the limit. But since these places have become necessary for public entertainment the authorities would be justified on keeping an eye on the rates they charge and amenities provided t the patrons.

One never hears of a cinema reducing it's rates because a film is short or not of high quality. But on the slightest excuse-if for instance there is a longer than usual film-the rates immediately shoot up. It is all take and no give.

At the same time hardly any attempt is made to improve the seating arrangements, the air conditioning or the toilet amenities. In a city like Delhi, no cinema should be allowed to operate unless it is fully air-conditioned. The toilet arrangements should also have some reasonable relationship with the number of seats. These are matters that should be looked into by the health authorities and steps must be taken to ensure that people who pay high rates for their entertainment are adequately served in return.