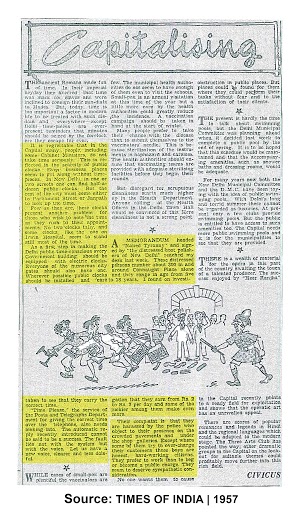 It is regrettable that in the capital,many people including some Cabinet Ministers,do not take time seriously.This is reflected in the scarcity of public clocks.Even business places seem to get along without time-pieces.In New Delhi,in one or two streets one can find half-a-dozen public clocks,but the rest of the city must come either to Parliament street or Janpath to look up the time.
Few as they are,these clocks present another problem for those who wish to note the time as they rush to their appointments.No two clocks tally, and some clocks ,like the one on Irwin Hospital,seem to stand still most of the time.
As a first step in making the Delhi public time-conscious every Government building should be equipped with electric clocks.Everyone of the numerous city gates should also have one.Wherever possible,public clocks should be installed and care taken to see that they carry the correct time.
"Time please",the service of the Posts and Telegraphs Department for giving the correct time over the telephone,also needs looking into.The automatic reply recently introduced cannot said to be a success.The fault lies not with the system but with the voice.Let us have a new voice,clearer and less doleful.

A MEMORANDUM headed "Naked Tyranny" and signed by "the distressed boot polishers of New Delhi" reached my desk last week.These distressed persons number about 300 in and around Connaught place alone and they range in age from five to 18 years.I found on investigation that they earn from Rs. 2 to Rs. 3 per day and some of the luckier among them make even more.
Their complaint is that they are harassed by the police who object to their presence on the crowded pavements and under the shop galleries.Except where some of them try to over-charge their customers these boys are honest,hard-working citizens.They prefer to work than to beg or become a public charge.They seem to deserve sympathetic consideration.