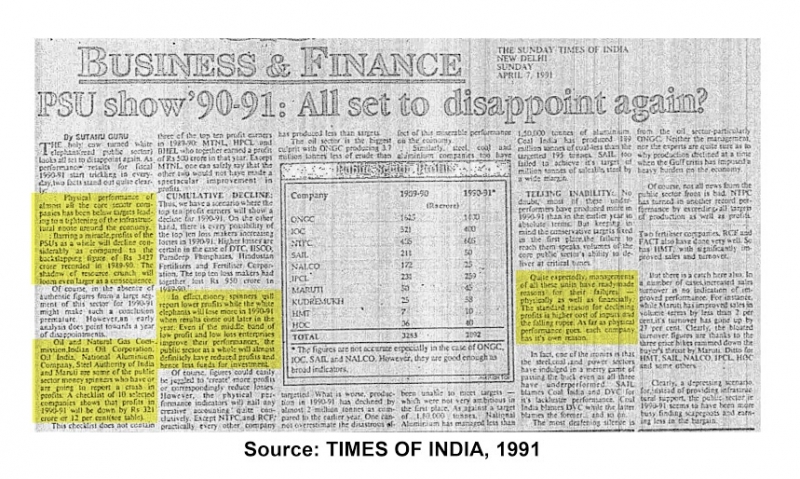 Physical performance of almost all the core sector companies has been below targets leading to a tightening of the infrastructural around the economy.Barring the miracle,profits of the PSU's as a whole will decline considerably as compared to the backslapping figure of Rs. 3427 crore recorded in 1989-90.The shadow of resource crunch will boom even larger as a consequence.
Oil and natural gas commission,Indian oil corporation,Oil India,National Aluminium company,Steel Authority of India and Maruti are some of the public sector money spinners who have or are going to report a crash in profits.A checklist of 10 selected companies shows that profits in 1990-91 will be down by Rs. 321 crore or 12 percent.
In effect,money spinners will report lower profits while the white elephants will lose more in 1990-91 when results come out later in the year.Even if the middle band of low profit and low loss enterprises improve their performances,the public sector as a whole will almost definitely have reduced profits and hence less funds for investment.
Quite expectedly,managements of all these units have readymade reasons for their failures-physically as well as financially.The standard reason for declining profits is higher cost of inputs and the falling rupee.As far as physical performance goes,each company has it's own reason.